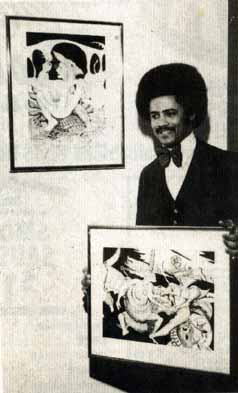 Daniel Wynn with two of his paintings: Miss American Justice on the wall; I Am To Blame in his hands.

Snow covered the area, cars were slipping and sliding, and the radio was broadcasting warnings to motorists to stay off the roads unless absolutely necessary. None of it stopped artist Daniel R. Wynn from maneuvering his sports car from southeast Washington to the Gazette for an 11 am scheduled interview. "That's example of my positive thinking," said Wynn, who believes that spiritual forces in the universe are responsible for his calling, and allows that "If youve ever looked at Kahil Gibrans The Prophet you know we look identical  who knows, I may be him."

The articulate artist, and two others  James Padgett and Donald Benjamin  will be exhibiting his work at the Martha Washington Library on Fort Hunt Road through Feb. 28, in honor of Afro-American History Week. "Art is universal and the last hope to bring people of the world together," said Wynn, who feels Spiritualism is directly related to universal artistic creation."

He sites African, Oriental, and his own work as examples of Spiritualism in art. "In certain areas of Africa, artists shoot trees with a bow and arrow, believing that then the spirits in the trees will transfer into heir own sculpture. The Orientals believe life is a recurrence of all things," he continues. "Spiritual forces stay the same, they just take different shapes."

Wynn did a piece of sculpture a few years ago entitled Life, Death, Love, and Hate. Afterwards I was reading through some Oceanic art from 250BC when I saw almost identical heads, birds, and other forms that were in my own newly completed work. The symbolism was the same because throughout the ages in.dividuals identify with the same things.

Born and raised in Florida, Wynn started sculpturing in clay at the age of four, selling his first painting at age 13 for $150. Struggling to give vent to his interest in art made life difficult for the young boy. His peers shunned him. Only his father encouraged him and recognized his talent "Most people feel art is strictly for the elite," he said remembering the struggle. "I didnt come from middle class, so It was rough."

Wynn stuck to painting with a religious theme influenced by his religious family. "But I always was spiritual," he says. "I was born with a veil over my face, which really is an extra layer of skin on a babys face that means the child is blessed or has spiritual tendencies. It can foresee the future." "Sometimes I hear sound waves telling me to make certain moves." Even his name is spiritual to him. "Daniel, like in the Lions Den. God intended for me to come forth."

Wynn thinks artists should be well-rounded, not locked into one medium. Hes tried many options from illustrations to dabbling in Cubism, Impressionism, and sculpture. His present interest is something he calls "Danism" after his first name, or "Surrealism in Ink."

Wynns earlier work depicted the agony, social deprivation, religious beliefs and survival instincts of black people in America. Recently, his pen and ink drawings have depicted America, its problems and its relationship to the universe. Double-faced figures with great gaping holes in the body, beautiful flowers always being crushed, painted women representing cunning rape of the universe, and candles representing hope but located in the crotch of the world, are but a few of his more vivid symbols. "Many people are frightened by my subject matter," says Wynn, "they have different reactions, but I think they all relate to a fear of the truth. The world is on a downhill slide  man against man, father against son  and I show this turmoil."

Miss American Justice canvas has a two-sided head, an eagle representing the country and a woman depicting the cunning trying to subvert it. The hole in the figure symbolizes superficiality, no inward feelings. The turtle represents progress moving at a slow pace with the weight of the universe leaning and sitting on it.

"Equality," says Wynn of the painting, "is always a slow process stifled by a chaotic system lacking understanding for any race or color." In the painting I Am To Blame, the corrupt-looking US eagle surveys the world but rejects responsibility for its problems. Around him a painted mask smiles on one side, cries on the other. Politics is represented by a serpent squeezing the life out of the country, with the candle symbol of hope, fighting to be free.

As a black artist growing up in the south ostracized by his friends, Wynn is especially aware of the problems minority artists face. "Even today," he says, "black kids arent taught to appreciate their own culture or any other. Even great black artists havent received the proper recognition."

"One of the major difficulties is support from other blacks. Black publications should promote and Initiate support movements. In almost all magazines geared for whites, there are sections on art, but never in black ones."

Wynn wants the magazines to promote the artists with the idea of creating more galleries. "Minority artists have a difficult time getting into galleries. They have to pay through the nose." Wynn who has his Masters in Fine Arts, a number of shows to his credit, and considerable exposure to young people through his work, has made prints of some of his work so young people can afford to buy them.

"I want to do my part to spread the word," he says.